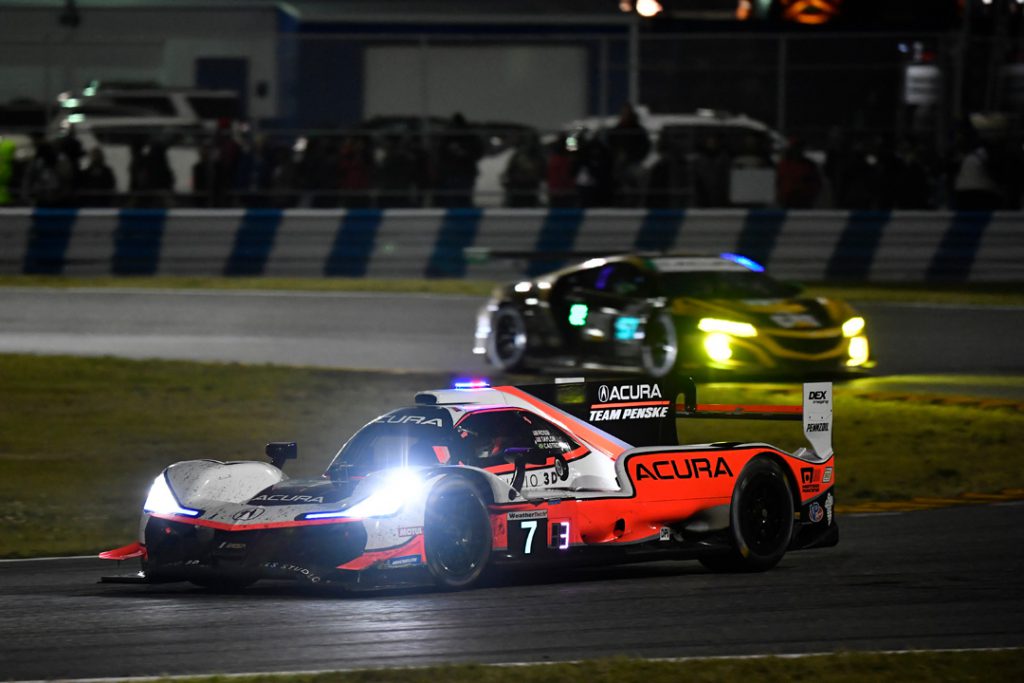 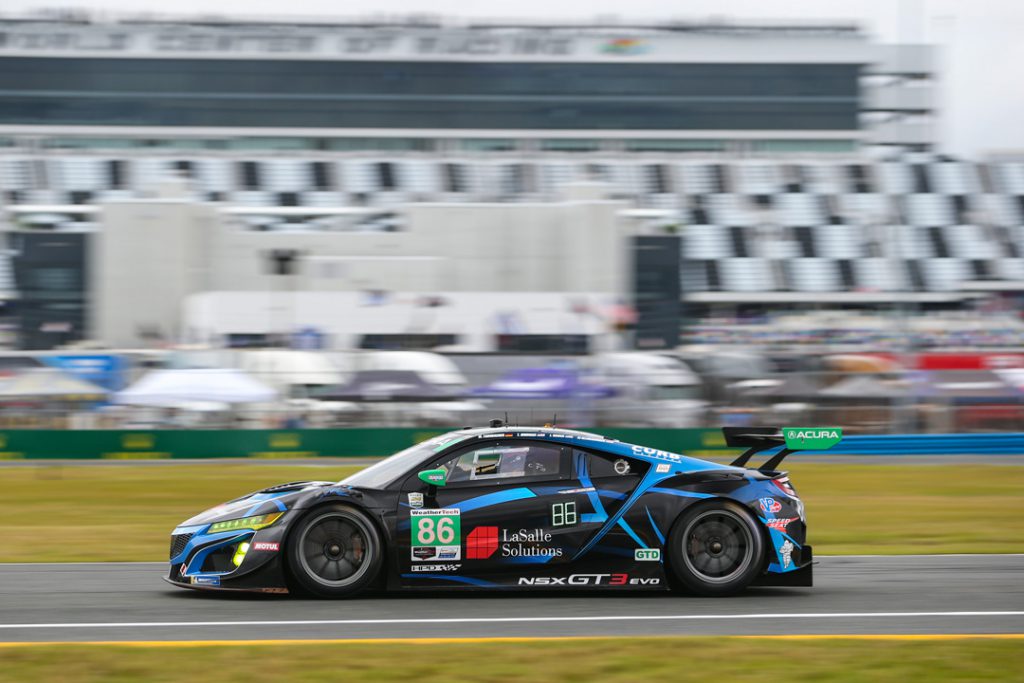 Heavy rain and resulting low visibility descended upon the Daytona International Speedway just past the mid-point in this weekend’s Rolex 24, resulting in frequent accidents, two race stoppages and a constantly jumbled order.

For the first time in history, the race was red flagged twice due to wet conditions, first for an hour, 45 minutes early Sunday morning; and a for second and final time at 12:39 p.m. Race officials waited for conditions to improve enough to resume competition, but eventually displayed the checkered flags to end the race 10-minutes shy of the scheduled 24 hours.

When the opening round of the 2019 WeatherTech SportsCar Championship had concluded, Acura Team Penske scored a third-place result overall and in the Daytona Prototype International category, while Meyer Shank Racing came away with a fifth-place finish in the GT Daytona class for the Acura NSX GT3 Evo.

However, with less than five hours remaining, the #6 ARX-05 of Juan Pablo Montoya, Dane Cameron and Simon Pagenaud went to the garage to repair an external oil system issue.  The Acura returned to the track, but was now 18 laps off the pace. The rain, frequent cautions and race stoppage left them sixth at the finish.

The #7 Acura continued to challenge for the lead through the second and final race stoppage, taking the final Red Flag – and eventual checkers – in third for the driver lineup of Helio Castroneves, Ricky Taylor and Alexander Rossi.

Starting third with a driver lineup featuring Mario Farnbacher, Trent Hindman, Justin Marks and A.J. Allmendinger, the #86 MSR Acura moved into the lead in the first hour and led several times thereafter as no less than a dozen GTDs remained on the lead lap and in contention throughout the first 14 hours of the race.  Pit stops, spins and collisions in the final hour on track jumbled the running order, but the #86 Acura survived to finish fifth.

The arrival of rain in the 14th hour began to separate the contenders, including the second MSR Acura of Katherine Legge, Simona De Silvestro, Bia Figueiredo and Christina Nielsen.  The all-star female driver lineup, assembled by team principal Jackie Heinricher with support from Caterpillar, was running fifth when damage from a deflated tire forced the #57 Acura NSX GT3 Evo to the garage for repairs.  As a result, the car returned to action 10 laps in arrears to the leaders, and finished an unrepresentative 13th.

Next
The 2019 WeatherTech SportsCar Championship now moves to central Florida for the 67th annual 12 Hours of Sebring, March 16 in Sebring, Fla.

Video recaps from this weekend’s Rolex 24 endurance race at Daytona International Speedway are being posted on the “Honda Racing/HPD” YouTube channel.  Produced by the Carolinas Production Group, the video packages can be found in the 2019 HPD Trackside Video Playlist at: https://www.youtube.com/HondaRacingHPDTV.

Quotes
Steve Eriksen (Vice President and COO, Honda Performance Development) on this weekend’s Rolex 24: “While we scored a podium finish in just our second 24-hour race with the Acura ARX-05, it wasn’t representative of the true pace we demonstrated throughout the first half of the race.  Acura Team Penske and Meyer Shank Racing did an excellent job of dealing with ever-changing conditions, and our endurance drivers, including Alexander Rossi, Simon Pagenaud and A.J. Allmendinger, drove outstanding stints and played an important role in keeping our cars in contention.  Unfortunately, the results did not reflect the effort from everyone with the teams and at Honda Performance Development.”

Ricky Taylor (driver, #7 Acura Team Penske ARX-05) led several times overall, finished third: “I mean, nobody likes to see a race finish under a Red Flag, but conditions were just awful.  I’m really proud of our guys and our Acura.  This is the second year in a row that our car was really good, and ran well for the 24 hours.  Last year, it was an on-track incident that caught us out.  Once again, Acura Team Penske prepared a fantastic car.  In the dry, at least, we had a great chance at winning.  But at the end of the day it’s a podium finish, great points for the championship, and we’ll go to Sebring and try to keep the momentum going.”

Trent Hindman (driver, #86 Meyer Shank Racing Acura NSX GT3 Evo) led GTD, finished 6th: [on racing in the heavy rain on Sunday]  “I was just thinking the whole time about surviving.  There were a lot of very good drivers making some absurd mistakes out there.  So I just tried to focus, not make any mistakes and make up some time.  Unfortunately, the rain just came down harder.  IMSA made the right call.  It’s a shame.  Both the #57 and #86 Acuras were on really good strategies, even after the rain started.  It was more or less the luck of the draw, but it was a great result for the LaSalle Solutions Acura NSX GT3 Evo; and a great start for Mario and myself for the championship, which is going to be our goal all year.”

In Honda news... illustrations of the upcoming Nor

Fresh take on this classic 👌 #taillighttuesday