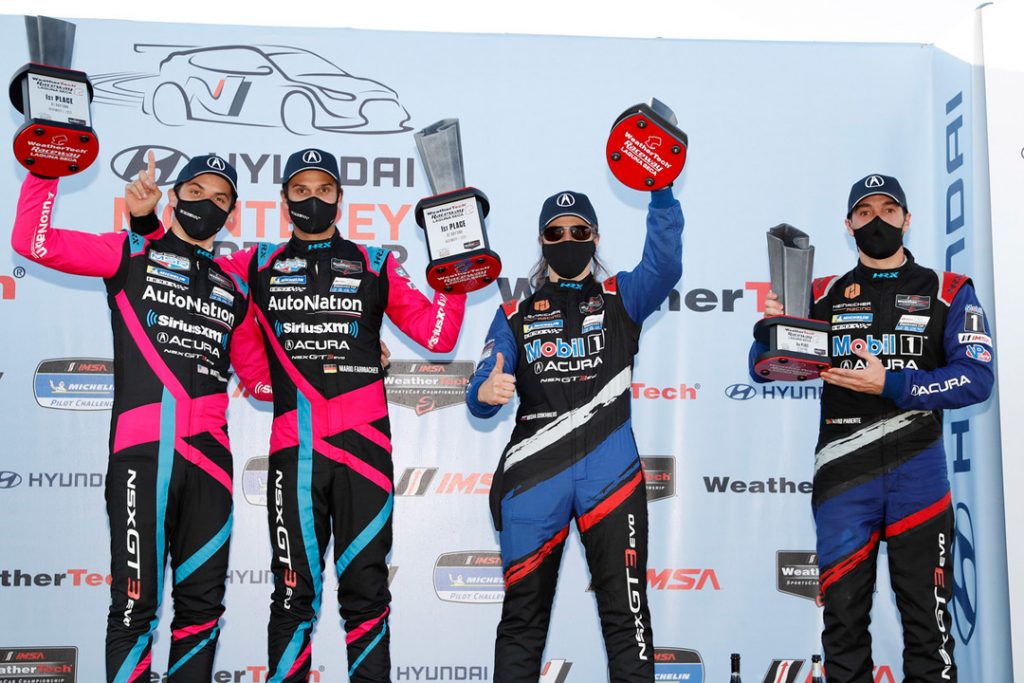 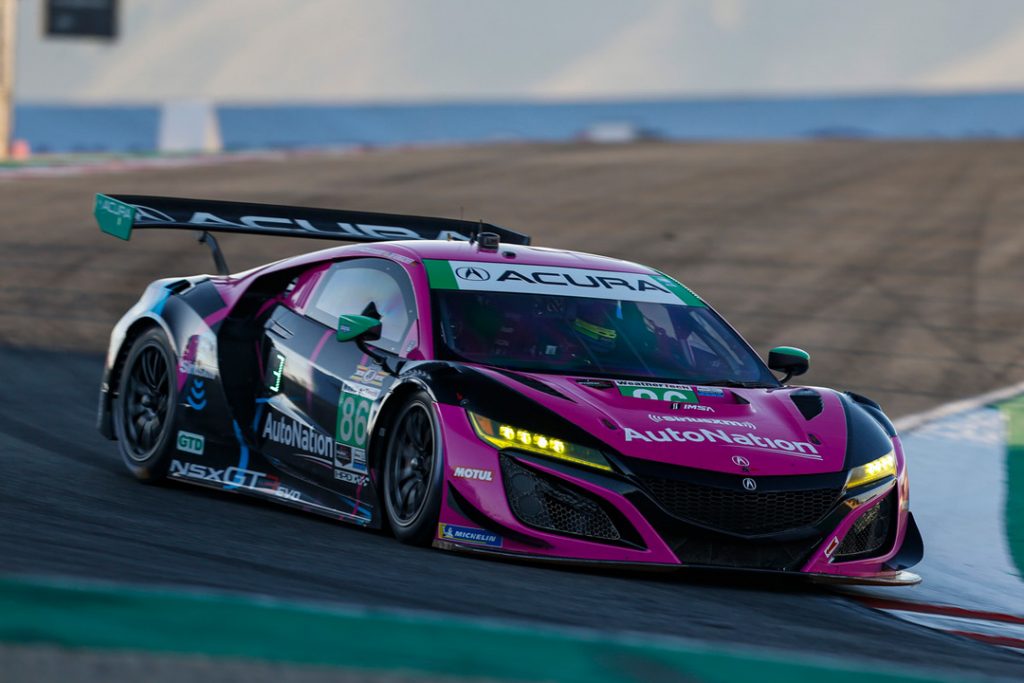 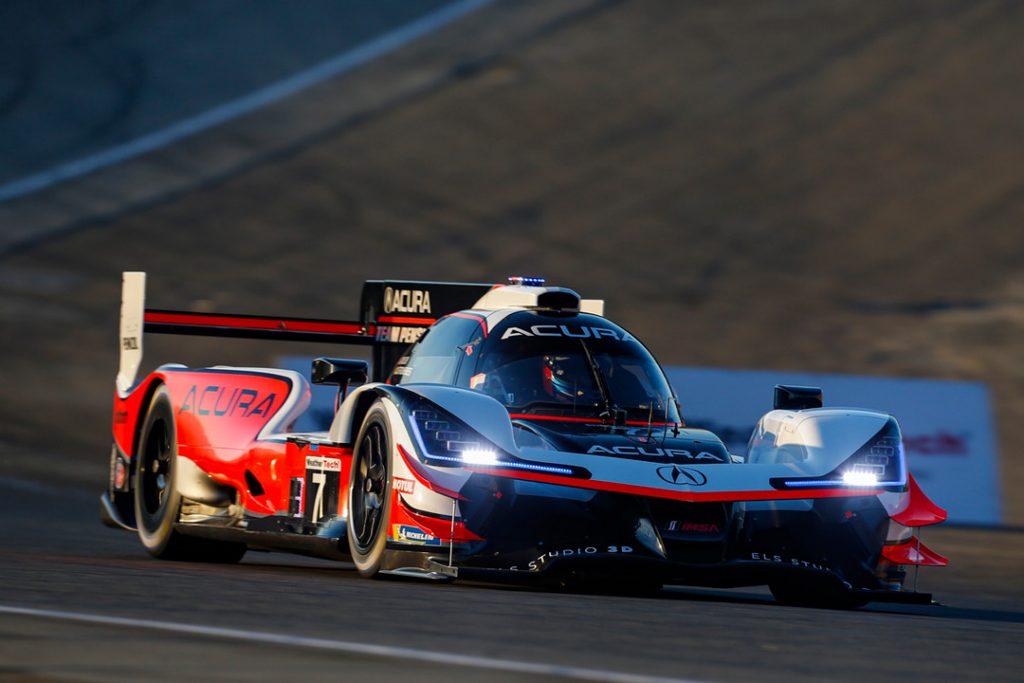 Acura resumed its race-winning ways in the IMSA WeatherTech SportsCar Championship Sunday at WeatherTech Raceway Laguna Seca, scoring its second sweep of the 2020 season with a 1-2 finish overall and in DPi for Acura Team Penske, and a 1-3 result in GTD for the Meyer Shank Racing Acura NSX GT3 Evos.

As a result of today’s wins – the best combined finish for Acura in the three years the company has been contesting both DPi and GTD – Acura goes to the season finale at Sebring International Raceway leading the IMSA Manufacturers’ and Drivers’ championships GTD; and the Drivers’ Championship in DPi; while trails in the DPi Manufactuers’ Championship by just a single point.

The late-race swap enabled Castroneves and Taylor to score their fourth win from eight races this season, moving the pair to the top of the championship with 242 points to 240 for Wayne Taylor Racing drivers Renger van der Zande and Ryan Briscoe, who finished sixth today.

Montoya took charge of the two-hour, 40-minute contest in the #6 Acura ARX-05 right from the green flag, while outside front-row starter Castroneves slotted into second as the pair of Acuras led the 29-car starting field. Montoya soon established a comfortable, eight-second lead before handing off the driving duties to Cameron at the first scheduled pit stop. Cameron maintained the advantage for the #6 Acura ARX-05 throughout the next two stints, building a lead of as much as 12 seconds.

Meanwhile, Castroneves survived an early scare when contact with the GTLM Corvette of Jordan Taylor resulted in the Acura losing a front aerodynamic “dive plane” in Turn 11. Despite the resulting understeer, Castroneves and co-driver Ricky Taylor were able to fend off the frequent advances from the #31 Cadillac of third-running Pipo Derani and Felipe Nasr until the first and only caution flag of the race – for debris on track – waved with just over 20 minutes remaining.

However, when green flag racing resumed, both Cameron and Taylor were able to gap the field, enabling Cameron to let his teammate into the lead in the #7 Acura for the final two laps. The 1-2 finish for Acura Team Penske move Castroneves and Taylor into the Drivers’ Championship lead with 242 points to 240 for van der Zande and Briscoe; and takes Acura to within one point of Cadillac [263-262] with just the season finale at Sebring remaining.

Leading the GTD field from the class pole, McMurry held off a challenging BMW in the hands of Robby Foley at the start, and established a commanding lead through the first stint of the race before handing over to teammate Farnbacher with under two hours to go.

Farnbacher continued to hold the advantage in his Acura, despite traffic that allowed the BMW, now with Bill Auberlen driving, to close the gap through the middle stages of the race. But once in clear air, Farnbacher was able to extend the lead until a late-race caution bunched the field up again. When the green waved once more in the final 15 minutes of the race, Farnbacher again stretched the lead to more than 10 seconds at the checkers.

The #57 Heinricher Racing with MSR Curb-Agajanian Acura of Misha Goikhberg and Alvaro Parente had their best result of 2020 with a third-place result. Goikhberg had a stellar start from fourth, getting around the #63 Ferrari for third. He and co-driver Parente would maintain their rapid pace throughout the day, finishing third to give Acura four podium-finishing cars today.

The Sprint Championship-contesting Gradient Racing #22 Acura NSX GT3 Evo ran their final IMSA race of the season, highlighted by a season-best eighth in qualifying by starting driver Till Bechtolsheimer. Although co-driver Marc Miller was shuffled back to a 12th-place finish late in the contest, their NSX showed strong pace in the race, with Miller setting a best race lap of 1:25.922, a time eclipsed by only two other GTD entries.

Today’s class victory by McMurry and Farnbacher catapulted them back to the lead of the IMSA WeatherTech SportsCar Championship GTD Drivers’ standings by seven points, and gives Acura a two-point advantage in the Manufacturers’ title heading into Sebring.

The 2020 IMSA WeatherTech SportsCar Championship now takes a weekend off before resuming November 12-14 for the season-ending Mobil 1 Twelve Hours of Sebring at the famed Sebring International Raceway in central Florida.

Ricky Taylor (#7 Acura Team Penske ARX-05) race winner, Fourth IMSA victory of 2020, moves into the DPi Drivers’ Championship lead with co-driver Helio Castroneves: “It was them [teammates Juan Pablo Montoya and Dane Cameron] being nice guys for us. We were strong all the day, but the No. 6 [Acura] was super, super strong. At the end of the race, we weren’t specifically asking [for a pass around], but when you work for such a strong team like Acura Team Penske, all eyes are on the big goal, the championship. They really were the class of the field this weekend, they really earned the win, but they thought about us and our championship situation.”

Mario Farnbacher (#86 Meyer Shank Racing Acura NSX GT3 Evo) Second GTD win of 2020, returns to the lead of GTD Drivers’ Championship with co-driver Matt McMurry: “That’s exactly what we needed. Last year, we had such a hard race here [finishing eighth] and in a million years I wouldn’t have thought our Acura would perform as well as it did today. I really have to thank Matt [McMurry], because being on the pole here is at least 80% of the job, since [the race here is] all about track position. Our engineer [Ryan McCarthy], he made a `masterpiece’ out of the car. He did a [setup] change overnight and it improved everything – tire wear, pace, overall pace. I’m so incredibly happy that we’re back in the lead of the championship because that’s the important part going into the last race. Bringing home the championship, especially in the last year of the car, means everything.”

David Salters (Technical Director, Honda Performance Development) on today’s double victory for Acura: “Laguna Seca is one of the world’s most iconic race tracks, it’s great to show Acura’s world-class `Precision Crafted Performance’, and to take the fight to our very skilled competitors here today in both DPi and GTD. Our drivers and teams had a superb weekend, with pole positions and victories in both classes; and our best combined result since we returned to DPi competition, along with GTD, in 2018. Massive thanks to the team of committed associates at HPD who engineer and support these projects. We race to grow our people and technology at HPD, and weekends like this really reward everyone’s efforts and competence. Coming into this weekend, our goal was to put ourselves in position to take the championship fight to the last race. So lets go race and entertain the fans at Sebring.”