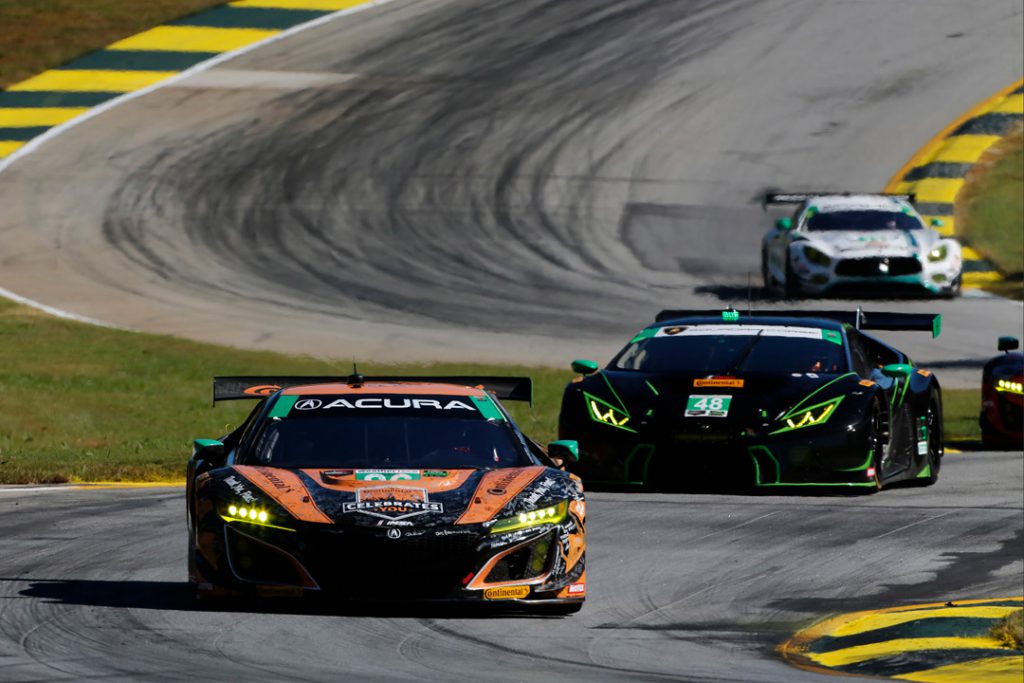 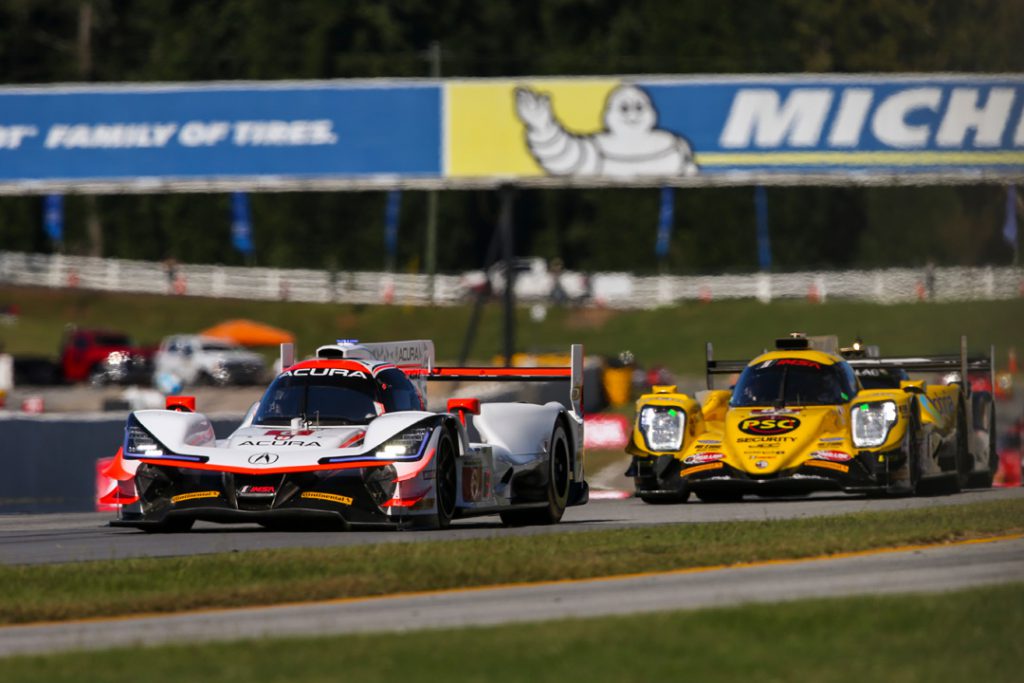 Katherine Legge and her Meyer Shank Racing team fought all the way to the checkers Saturday at Road Atlanta, with a second-place finish in their #86 Acura NSX GT3, leaving them second in the GTD championship following the season-ending Petit Le Mans endurance contest.

In Prototype, the #7 Acura Team Penske ARX-05 of Helio Castroneves, Ricky Taylor and Graham Rahal contended for the overall win for the first two-thirds of the 10-hour race, then recovered from a penalty for passing under caution to finish fifth.

On Friday, Acura unveiled an enhanced NSX GT3, designated the NSX GT3 Evo, which will compete on racetracks throughout the world in 2019, including the IMSA WeatherTech SportsCar Championship.  The Acura NSX GT3 Evo remained on display in the Road Atlanta infield “Fan Zone” throughout the race weekend.

Legge and the MSR team came to Road Atlanta trailing Sellers and primary co-driver Snow by six points.  To claim the title, the Acura team would have to finish a minimum of two places ahead of the Sellers/Snow/Lewis Lamborghini.  With less than an hour remaining, that scenario looked possible, as Parente led in the #86 MSR Acura and Sellers ran fourth.  However, Sellers was able to gain a position to third; and a “bump and run” move by the Ferrari of Daniel Serra dropped Parente to second.  The trio finished in that order, giving Sellers and Snow the championship by just four points.

After starting fourth, the #93 MSR Acura of Lawson Aschenbach, Justin Marks and Mario Farnbacher ran as high as second in GTD, but was forced out of the race in the fifth hour due to a cracked oil fitting and resulting leak.

Acura Team Penske Prototype
Castoneves, Taylor and Rahal kept their Acura ARX-05 prototype in the top three for much of the opening six hours of today’s 10-hour race, leading several times.  But in the eighth hour, Castroneves received a “drive through” penalty for passing another car while a local yellow flag was displayed, dropping the trio to seventh.  A strong recovery in the final two hours resulted in a fifth-place finish.

After starting the #6 Acura ARX-05, Juan Pablo Montoya ran fifth in the opening hour, but locked a brake and made impact with the Turn Three barrier in the second hour of the race.  The car went behind the wall for extensive repairs.  The car returned to competition in the fifth hour with Dane Cameron at the controls, but well down the field.  Cameron, Montoya and third driver Simon Pagenaud persevered to finish 13th among prototypes.

Next
Saturday’s race concluded the 2018 IMSA WeatherTech SportsCar Championship, and the return of Acura in the prototype category, in addition to the company’s continued participation in the popular and competitive GTD division.

Acura returns for the 2019 WeatherTech SportsCar Championship, which opens January 26 with the Rolex 24 at the famed Daytona International Speedway.

Social media content and video links from this weekend’s Acura Motorsports activity at Road Atlanta are available on HPD’s Facebook page  (https://www.facebook.com/HondaRacingHPD) and on Twitter at (https://twitter.com/HondaRacing_HPD).

Produced by the Carolinas Production Group, YouTube video packages from the weekend can be found at: https://www.youtube.com/HondaRacingHPDTV.

Quotes
Katherine Legge (driver, #86 Meyer Shank Racing Acura NSX GT3) finished second in GTD, and second in GTD Drivers’ Championship after a season including two wins, four second-places and a third: “Congratulations to the Paul Miller team, because they deserved it at the end of the day.  But I’m so proud, incredibly proud, of Acura and my MSR team.  They did a phenomenal job of getting us into a position where we could win races and challenge for the title.  Alvaro [Parente, co-driver] drove superbly all year long.  He deserves to finish second with me, really.  Trent [Hindman, third driver] did a great job today and the team performed flawlessly.  I’m honestly disappointed.  I wanted to win the championship so badly.  But realistically, there’s nothing to be upset about.  We had a great season, and a great springboard for next year.”

Helio Castroneves (driver, #7 Acura Team Penske ARX-05) finished fifth: “Acura Team Penske did a phenomenal job. Everybody was really pushing and performed well.  It’s just unfortunate that we were penalized [for passing under caution].  I completely, absolutely disagreed with the call.  I saw the yellow [flag] and waited until I was past the scene [of a car stalled off course] before I made the pass.  But the officials did not see it that way. We had a car capable of winning, and we were in the hunt for the win until the penalty.  The good news is we showed great momentum.  What we learned this year, we’ll apply next year.”

Stephen Eriksen (Vice President and COO, Honda Performance Development) on today’s season finale Petit Le Mans race: “In Prototype, a fifth-place finish for the #7 Acura ARX-05 is not really representative of the pace demonstrated in the race by all three drivers.  The race effectively ended in the second hour when an apparent brake issue on the #6 resulted in a crash.  Acura Team Penske did a great job getting the car repaired and back on track later in the race.  GTD was an event-filled weekend, with the unveiling of the Acura NSX GT3 Evo for next season, an exciting 2019 program announcement for Meyer Shank Racing, and a very close battle for the championship that was not decided until the last lap.  We certainly learned a lot this season, and look forward to applying it in 2019.”