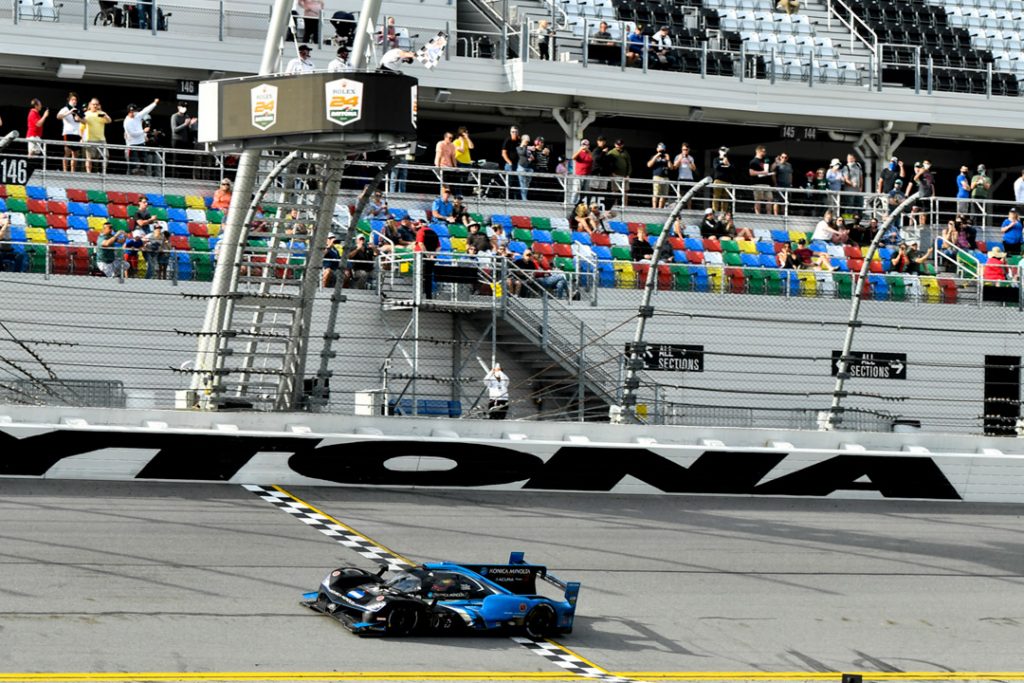 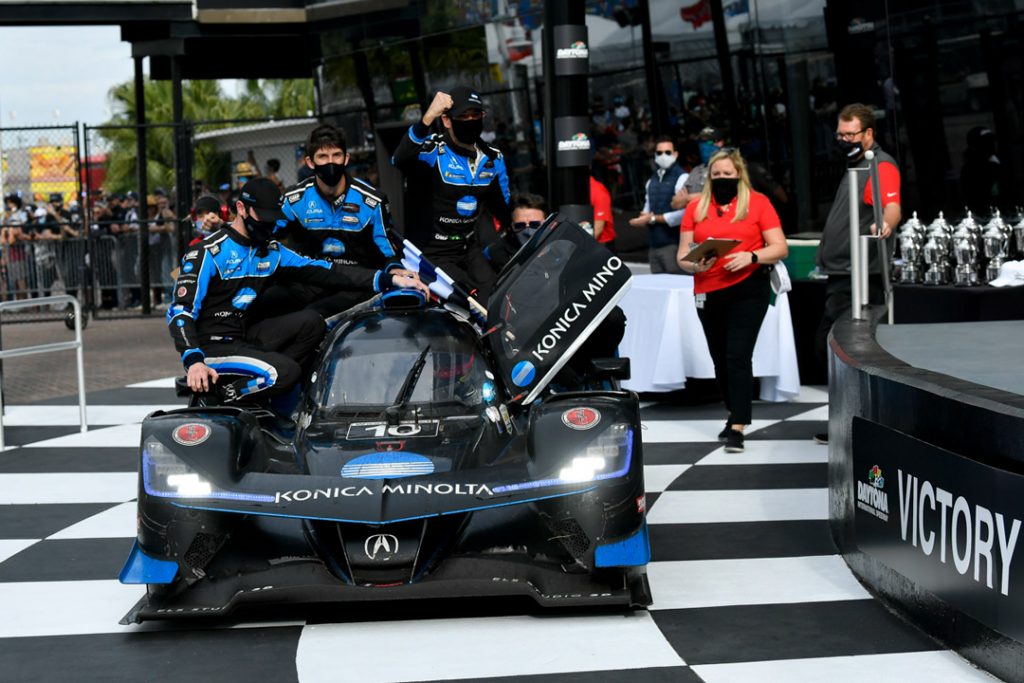 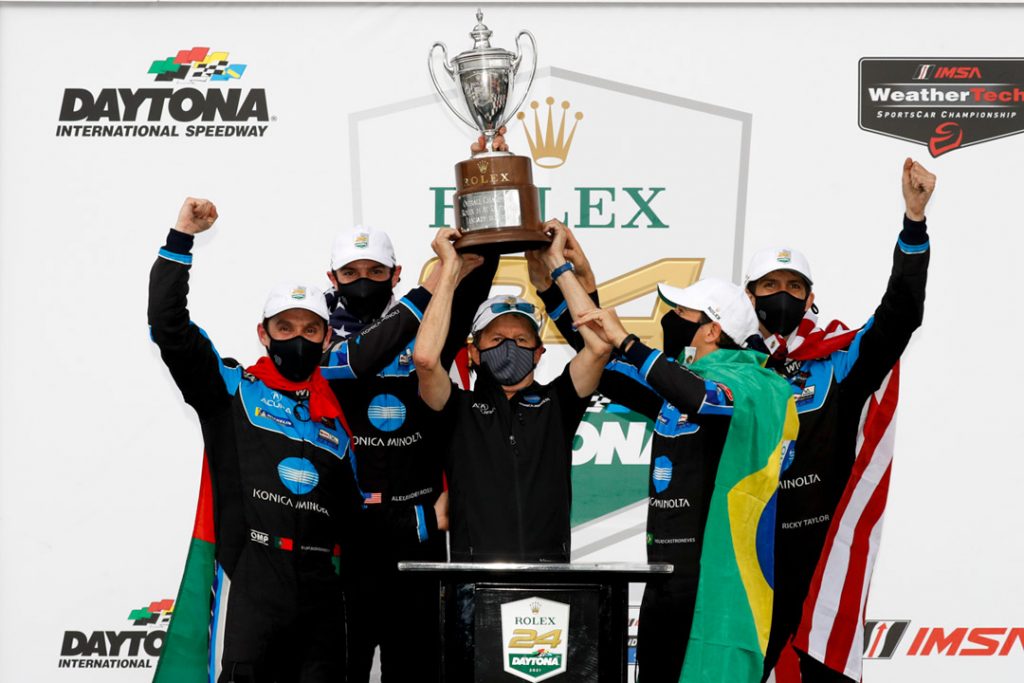 Almost exactly 30 years after Acura’s first class win at Daytona International Raceway, the manufacturer triumphed over all this weekend as Wayne Taylor Racing won this weekend’s 59th running of the Rolex 24 at Daytona.

The season-opening round in the 2021 IMSA WeatherTech SportsCar Championship, this weekend’s 24-hour endurance contest came down to the final hour, with five teams contending for the overall victory.  Combining speed with endurance – with the Acura ARX-05 prototype requiring fewer pit stops than the competition over the length of the race – the WTR driver lineup of Ricky Taylor, Filipe Albuquerque, Alexander Rossi and Helio Castroneves held off late-race charges from the Cadillacs of Chip Ganassi Racing and Action Express, the Mazda-Multimatic prototype, and fellow Acura team Meyer Shank Racing to score their third consecutive Daytona victory, and the first with Acura.

All five contenders were running within 30 seconds of each other as the race entered its final hour.  A “short fill” and two tire only change at the final pit stop moved Albuquerque’s Acura to the head of the field, with the Ganassi prototype of Renger van der Zande less than two seconds back. However, a cut tire with just seven minutes remaining sent van der Zande to the pits, and Albuquerque went on to take the checkers, and Acura’s first overall victory in the Rolex 24 at Daytona.

In the SiriusXM AutoNation Acura ARX-05, the Meyer Shank Racing lineup of Dane Cameron, Olivier Pla, Juan Pablo Montoya and A.J. Allmendinger also led multiple times throughtout the race, but was forced to deal with handling issues as winds increased in the final hours, taking the checkers in fourth.

Acura NSX GT3 Evo
Electronic issues and an early-race cut tire dented the Acura GTD debut of the Magnus with Archangel’s NSX GT3 Evo, driven by Andy Lally, John Potter, Spencer Pumpelly and two-time defending GTD champion Mario Farnbacher.  The cut tire, likely the result of debris on track, damaged the underbody and led to an unscheduled pit stop for #44 Acura in the opening hour, and a series of delays through the night left the NSX GT3 Evo team 11th at the finish.

DPi Manufacturers’ Championship (after 1 of 10 rounds)

Quotes
Filipe Albuquerque (#10 Konica Minolta Wayne Taylor Racing Acura ARX-05) Rolex 24 at Daytona winner:  “I think it was a hell of a show. I could almost see [Renger van der Zande’s] eyes in my mirrors, he was so hungry for this. He was faster than me, but it’s one thing to catch and another thing is to pass. He was really pushing hard. I was lucky that they had a puncture. This was probably the hardest race of my life.”

Dane Cameron (#60 Meyer Shank Racing ARX-05) finished 4th: “All in all it was an okay day. Our goal was to put ourselves in contention [for the win] at the end of the day and we did that by finishing on the lead lap. The Meyer Shank Racing boys did a great job preparing the car and executing pit stops without issues. It is probably the first time in six or seven years that I have run this race without a problem on a pit stop. I am very pleased with the effort the guys put in, with a short off-season and a large transition to a new program. We lacked a bit of speed near the end of the race today, but we were able to compete for a victory when it counted. We will take good [championship] points from today for our championship effort and we’ll move forward and turn the page to Sebring.”

David Salters (President, Honda Performance Development) on this weekend’s Acura victory at the season-opening Rolex 24: “It’s an historic day for Acura, and thanks to IMSA for putting on a stunning event. I want to thank all of our teams for their huge effort to come and race here in arguably one of the most arduous endurance events on the planet. They came, and demonstrated just how good they were.  This is all the result of a team effort.  Everyone at HPD was integral in developing the strong relationship we have with our teams, and I believe it showed in today’s results.  I also need to thank all the marvelous people at Team Penske for their efforts and success the previous three years.  They established the foundations that we’re now building upon.  Again, it’s all about a team of brilliant, hard-working people, and it shows the performance heritage of Acura.”

Next
The 2020 WeatherTech SportsCar Championship now moves to central Florida for the 69th annual Mobil One 12 Hours of Sebring, March 20 in Sebring, Fla.