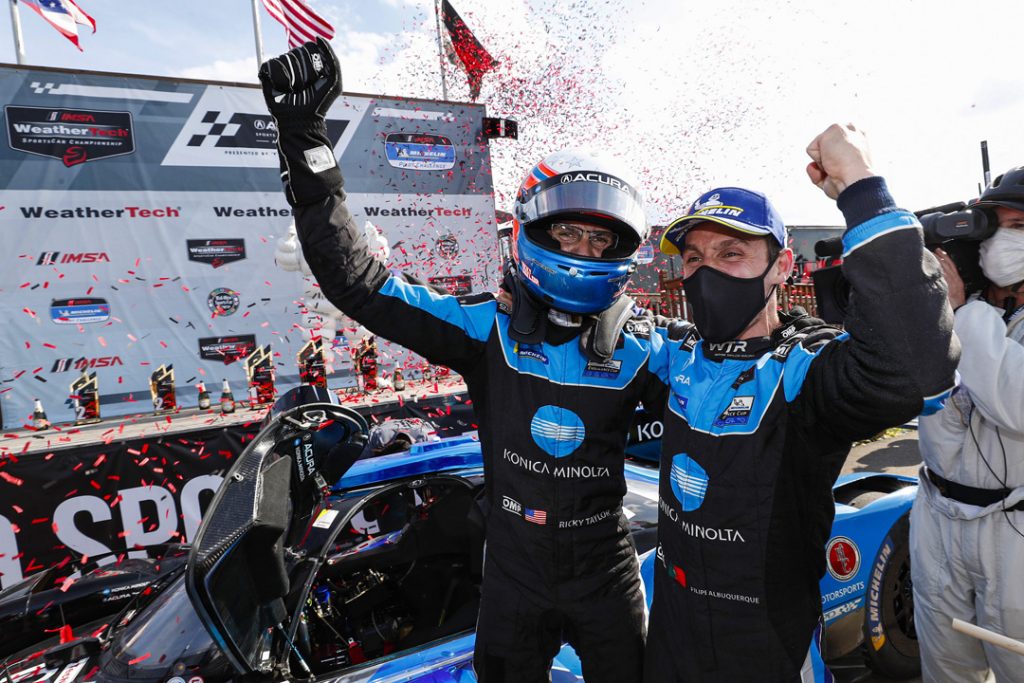 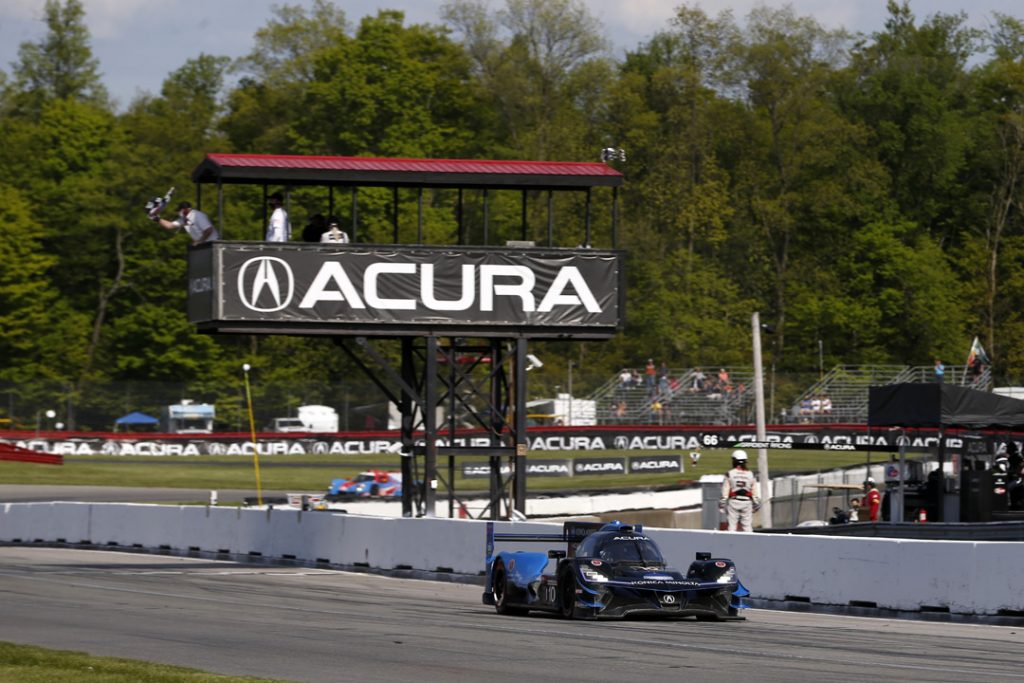 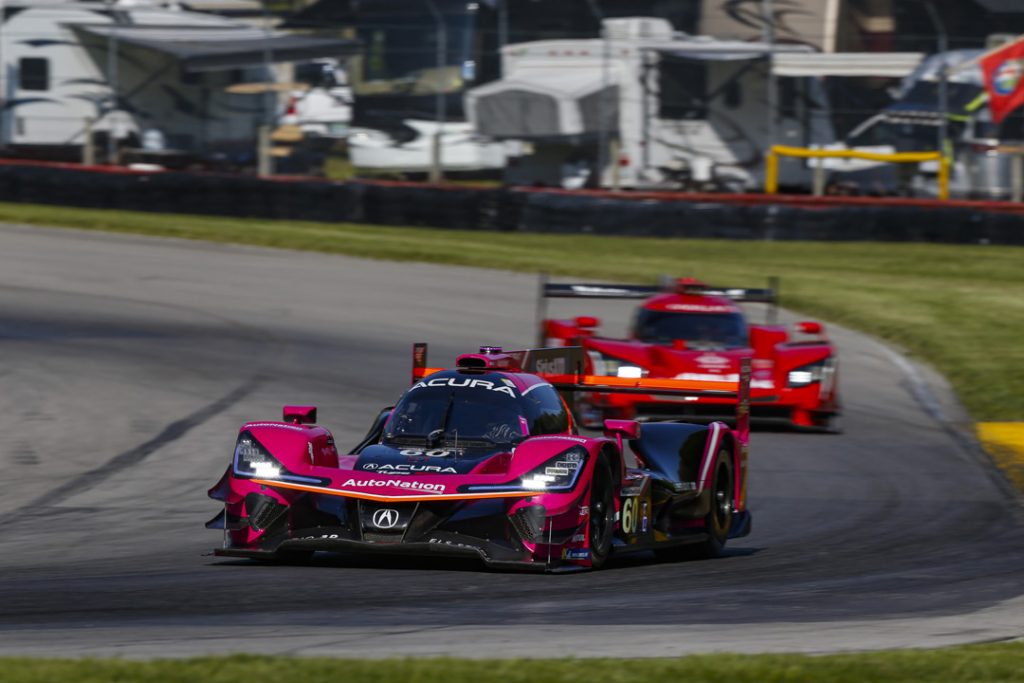 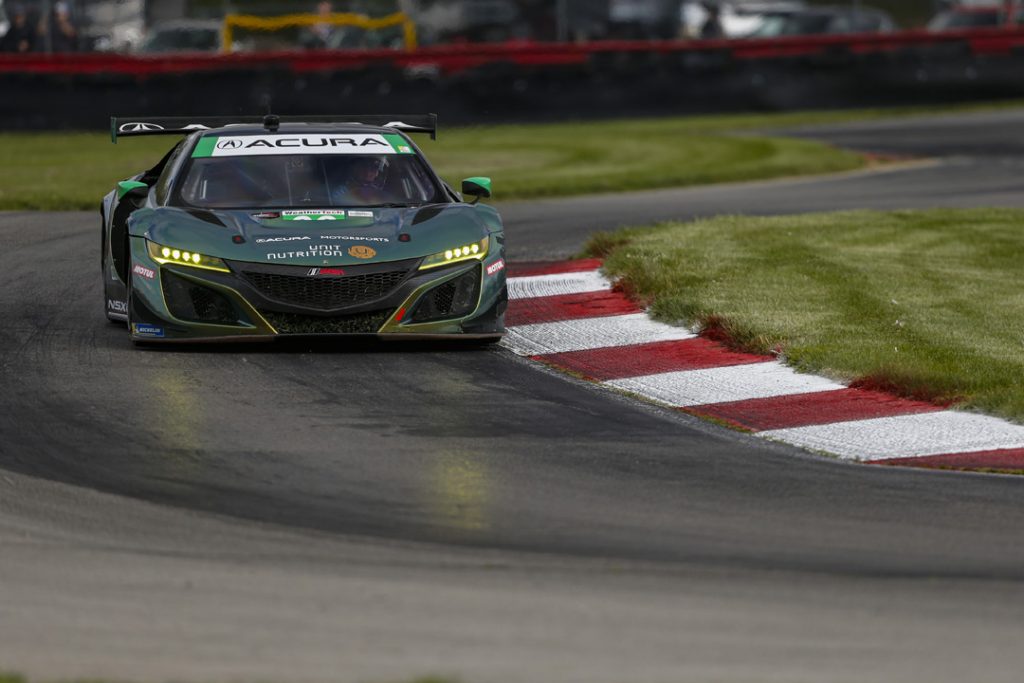 The stage was set for a thrilling finish when race officials called for a full-course caution with just over an hour remaining in the two-hour, 40-minute contest, following a multi-car GT class incident that left one car stalled just off the Mid-Ohio circuit. As racing prepared to resume with 45 minutes remaining, the six leading prototypes made what they hoped would be a final stop for fuel and tires, all at the very limit of their fuel range.

When the green flag waved for the final time, it was the #31 Cadillac of Felipe Nasr in the lead, but the second-running Taylor made a decisive pass for the lead in his Acura, and would hold off Nasr for the rest of the way, taking the win by a margin of 1.7 seconds.

The similar Meyer Shank Racing Acura ARX-05 of Olivier Pla and Dane Cameron ran as high as second at the mid-point of today’s race, but ultimately was one of several prototypes having to make a late stop for a “splash” of fuel, finishing fifth.

Acura NSX GT3 Evo
In the production-based GTD category, Jeff Kingsley and two-time defending class champion Mario Farnbacher produced a fifth-place finish in the first IMSA appearance for their Compass Racing team as an Acura team.  Also making their 2021 IMSA debut the Gradient Racing Acura NSX GT3 Evo finished eighth in the hands of Marc Miller and Till Bechtolscheimer; while John Potter and Andy Lally combined to finish ninth in their Magnus with Archangel NSX.

Quotes
Ricky Taylor (#10 Wayne Taylor Racing Acura ARX-05) race winner, second win of 2021; fourth consecutive win for Acura at Mid-Ohio: “For Acura first of all, four in a row here at Mid-Ohio is just fantastic. Everybody’s here from Acura today, it’s great to keep the streak going for them.  The fuel economy of this Acura was just outstanding today, and all credit to the team, really.  In the closing laps, I was only pushing as hard as they told me I could.  They had all the [fuel] numbers in their heads, and I was just trusting them.  Filipe gave me the car in awesome condition and a good position [following his stints behind the wheel], and that played a big role as well.  Happy we keep our [championship] points lead, and can’t wait to go on to the next one.”

Filipe Albuquerque (#10 Wayne Taylor Racing Acura ARX-05) race winner, second win of 2021: “Unbelievable race, this is all about IMSA. It was an amazing show for everyone. Two hours and 40 minutes of craziness. I fought hard during my stint and then it continued like this until the very last corner. It was an amazing strategy with the fuel, because everyone was tight. We were saying ‘Ricky you need to save fuel and hold position.’ We were asking everything from him, and he pulled it off. Thank you so much to everyone at the Konica Minolta and Acura. We’re trying new things with the limited experience we have with the car, and we’re pulling it off. It’s unbelievable. We can see how tough the championship will be because I was fighting with guys who ended up last and we won the race. That shows how much [things can change] during the race. It feels even better to be winning.”

Mario Farnbacher (#76 Compass Racing Acura NSX GT3 Evo) finished fifth in GTD: “First of all, Jeff [Kingsley, starting driver] made a great start in what was a very difficult weekend for him, as he really had no previous experience with the NSX. So for him, it was jumping into the deep end of a new environment.  But he improved all weekend and was a big part of the good result we achieved today.  When I got in the car, right away it was pretty good.  We lost a bit of paste in the second half of our stints, and that’s something we need to continue to work to make better.

Jon Ikeda (Acura Brand Officer) on today’s fourth consecutive win for Acura at Mid-Ohio: “Amazing.  Amazing day, and an amazing race. This is why we’re racing sports cars in IMSA, it’s the most incredible racing I’ve ever seen.  This is so good for Acura, and everyone from HPD [Honda Performance Development]. I can’t say enough about Wayne Taylor Racing, Filipe [Albuquerque] and especially Ricky [Taylor].  And the fact that I got to watch all of it with [race grand marshal] Helio Castroneves in the house, it was just an incredible race all round.”

The Motor City of Detroit is the next stop in the 2021 WeatherTech SportsCar Championship, for the Detroit Grand Prix, Presented by Lear.  One of two 100- minute “sprint races” on the IMSA calendar, the race takes place Saturday, June 12 on the tight and bumpy Belle Isle Park temporary street circuit, with live television coverage on the NBC Sports network.

New and old! Shoutout to @will_yyc and his new Int

Who needs an SUV? Desert runs in the NSX with @coc

A nice turnout of first and second gens, at a mini

That TLX side profile 👌 #sideshotsaturday 🚘