Twenty-five years a pretty long time:  it’s a quarter of a lifetime, for most of us.  And that length of time is an especially long time for a car to last these days.  Given average miles-per-year of 12,000, that puts a 25-year-old car at around 300,000 miles.  Road hazards, mishaps, mechanical failures, obsolescence, and exposure to the elements take most cars off the road long before they reach that mileage.

But two Acura Legends, appropriately named given their longevity, have survived two and a half decades and are still actively being shown and preserved in outstanding condition.  The cars, both 1994 “GS” trim models, were built in February 1994 in Sayama, Japan, made their way across the planet, and were delivered to Chicago area dealerships. They were mechanical and cosmetic identical twins, separated by only 145 production numbers and equipped with exactly the same drivetrains & colors.  They were finished in Desert Mist Metallic and powered by Type II motors with 6-speed transmissions. This combination was exceptionally rare at the time as the majority of buyers of the $42,000 flagship opted for the 4-speed automatic. Even today, not a single new Acura is offered with a clutch pedal. 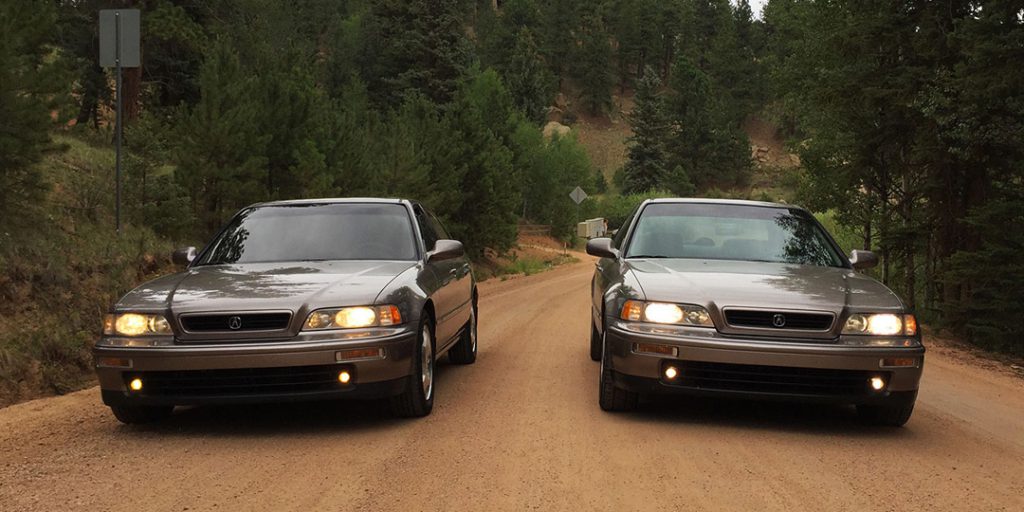 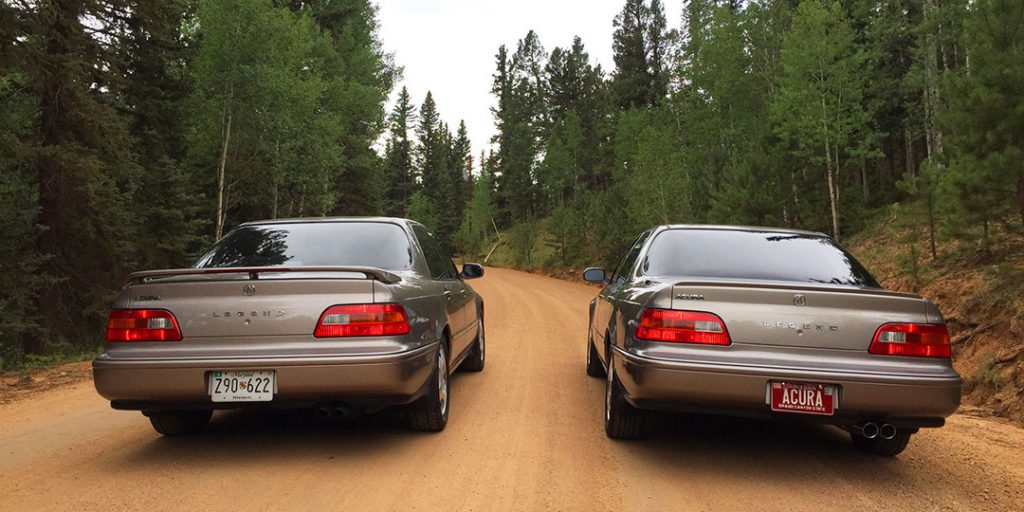 Today, these Legends belong to Chris Miller, of Baltimore, and Tyson Hugie, of Phoenix.  It was by chance that Chris and Tyson initially met: As members of a Honda Prelude internet forum in the late 1990s, they connected in a virtual sense thanks to an admiration for the same model of car.  It wasn’t until 2006 that they met in person. And in the ensuing years, they went on to buy twin Legends.

Tyson bought his Legend sedan, #21413, in Utah in 2008.  It needed a fair amount of mechanical and cosmetic restoration, but Tyson had been driving a Legend coupe for 5 years and knew well of the rarity of the sedans with a 6-speed manual transmission, so he took it on as a project.  It eventually became largely a garage queen, driven infrequently on weekends and preserved in top shape.

Chris got into the scene in 2015 after finding a project car of his own, #21268, in the Chicago area, ironically, the same area where Tyson’s car had also originated.  Chris’ car suffered from some of the same needs that Tyson’s did but received a complete overhaul of the mechanicals and a concours-level paint restoration over the course of the next couple of years.  It seemed fitting that these two friends would find cars so close in production sequence.

And finally, the crowning capstone to their effort was realized in summer 2018:  Tyson and Chris met at the 14th Annual National Acura Legend Meet (NALM) and were able to display their Legends together in an Acura dealership showroom in Colorado Springs, Colorado.  The cars had traveled a combined nearly 3,000 miles to be there. Each one had around 155,000 miles on the odometer. And it was a step back in time for the cars, their owners, and bystanders to reminisce and soak it all in.  The dealership, Pikes Peak Acura, even tuned its Sirius XM radio station to “90s on 9” to create the right atmosphere. 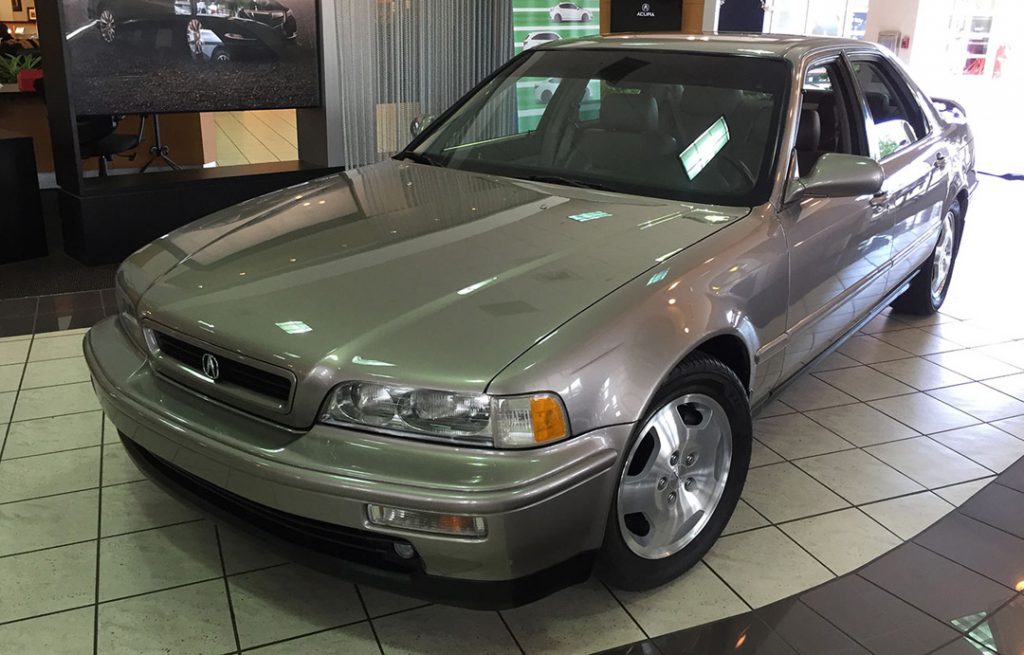 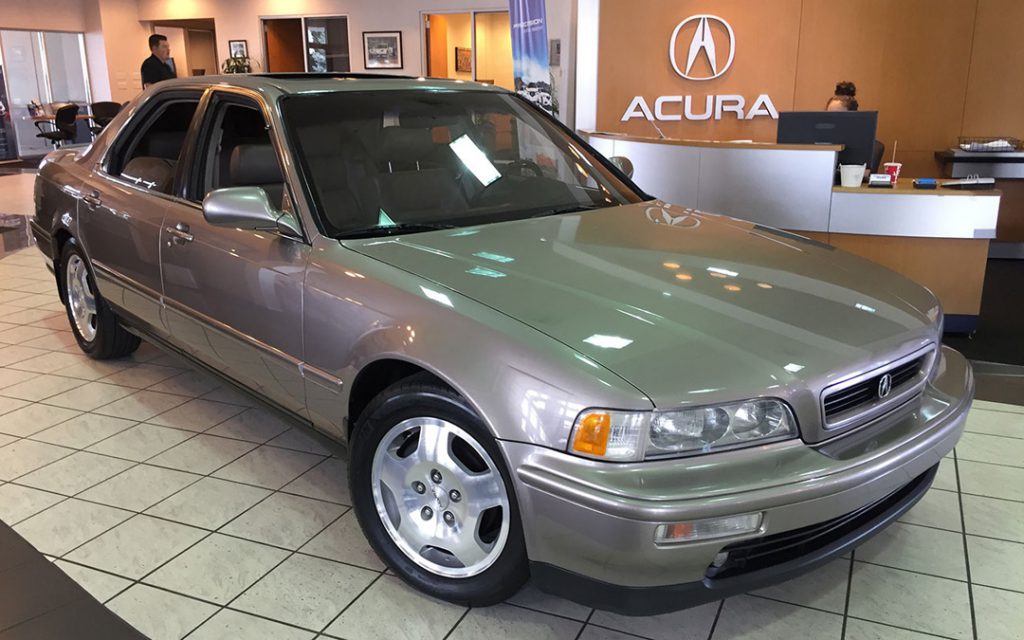 The staff at Pikes Peak Acura voted Chris’ Legend as their Best of Show, a worthy achievement for the effort that he had put into the car.  Both Chris and Tyson enjoyed a few minutes in the spotlight and reflected on the fact that to this day, the Legend GS 6-speeds in their possession are the only 2 of 2 remaining in the country in that specific color and transmission combination.  It’s not yet clear when the rare twin Legends will reunite once more, but for a brief moment in time, the clocks were turned back to an era when Ace of Base had top hits, Forrest Gump hit the box office, and the Sony Playstation rolled out. If only time could have frozen there a little bit longer.

One comment on “Separated at Birth: How Twin Acura Legends Reunited After Nearly 25 Years”