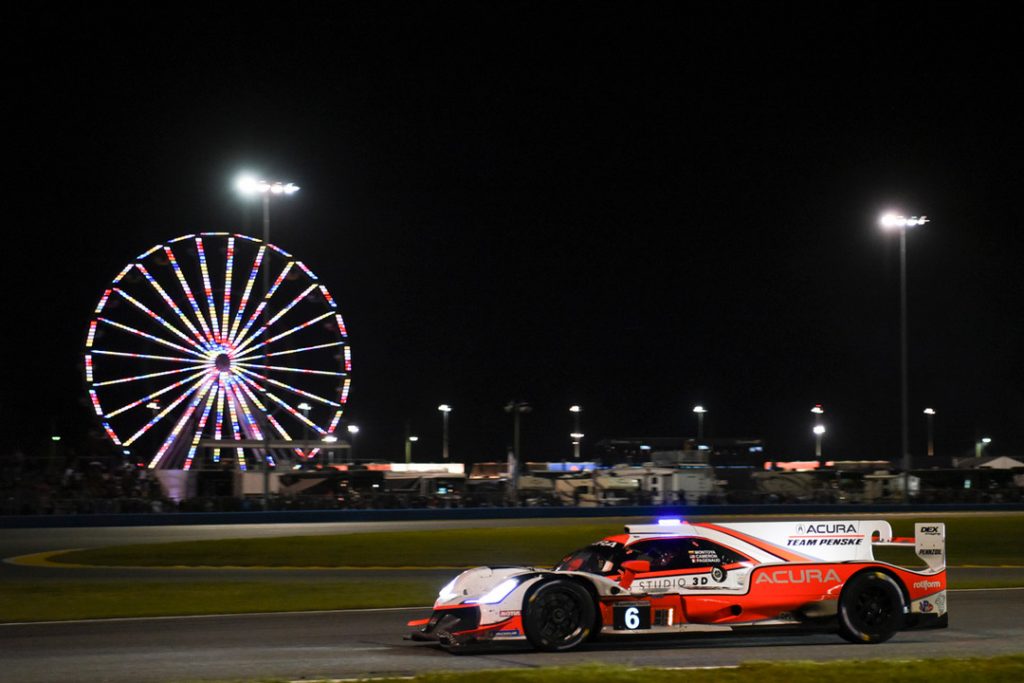 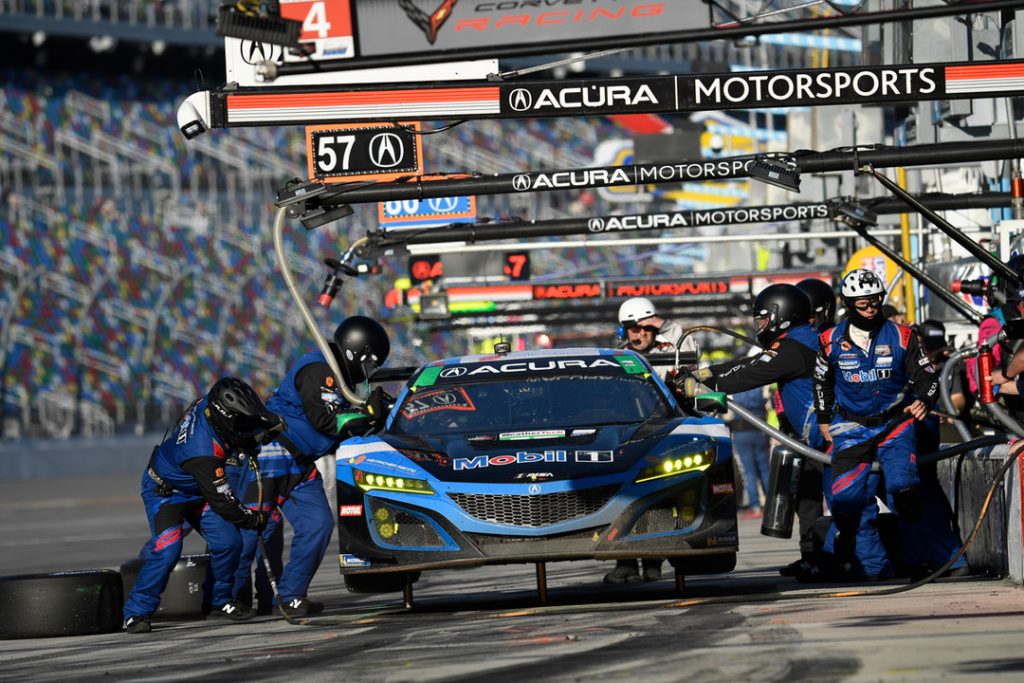 A four-car Acura Motorsports effort for the 2020 IMSA WeatherTech SportsCar Championship netted top-10 results in both the overall and GTD categories Sunday at the season-opening Rolex 24 at Daytona International Speedway.

Acura Team Penske and Meyer Shank Racing continue to lead the combined Acura Motorsports IMSA effort for 2020, as the company defends its 2019 DPi Drivers’, Team and Manufacturer championships; and driver and team crowns in the production-based GTD division

Acura Team Penske
Bringing back an intact driver lineup and the proven Acura ARX-05 chassis and engine to defend a clean sweep of the 2019 IMSA DPi drivers’, manufacturers’ and teams’ titles, Acura Team Penske’s hopes of winning the Rolex 24 were stymied by contact and damage.

The #6 lineup of drivers’ champions Dane Cameron and Juan Pablo Montoya – plus endurance driver and defending Indianapolis 500 champion Simon Pagenaud – got off to a strong start with a second-place result for Montoya in qualifying. But damage sustained early in the 24-hour contest resulted in a compromised race strategy for the #6 ARX-05, taking the car off the lead-lap pace to run sixth just past the mid-point of the race. Although lacking the pace of the leaders, Acura Team Penske minimized the time in Pit Lane to gain positions and finish fourth.

Hopes for victory from the #7 Acura trio of Helio Castroneves, Ricky Taylor and Alexander Rossi were dashed in just the fourth hour, when contact from the #55 Mazda of Harry Tincknell forced Castroneves to go directly to the Acura Team Penske garage for repairs. Repairs completed, the #7 ARX-05 returned to the track 30 minutes later, but more than 20 laps down to the leaders. With championship points at stake, the team persevered to finish eighth.

Meyer Shank Racing Acura NSX GT3 Evo
Starting third in the hands of Trent Hindman, the #57 Acura was running with the GTD class leaders at the end of the first hour. Co-driver Alvaro Parente took the NSX GT3 into second place, with a half-dozen entries making up the lead pack. Remaining co-drivers Trent Hindman and A.J. Allmendinger kept the car in contention in the always-competitive GTD field.

However, the #57 team fell off the lead lap during a scheduled brake change in the 12th hour, and an absence of caution flags – there were only four full-course cautions during the first 18 hours – made it difficult for the Meyer Shank team to regain the lap lost to the GTD leaders, eventually netting an eighth-place GTD result.

Drivers Mario Farnbacher, Matt McMurry, Shinya Michimi and Jules Gounon kept their #86 NSX GT3 in the top ten throughout the first quarter of the race. The quartet gained positions as temperatures began to drop in the nighttime hours, running fourth as the race passed its mid- point just after 1:30 a.m. ET. But in the next hour, Farnbacher was forced to take the #86 Acura to the garage area to replace a damaged nose and front splitter, costing the team approximately 20 minutes for repairs. The long stop ended victory hopes for the #86 team, which returned to the track 14th in GTD and 16 laps down to the GTD lead, eventually finishing 10th.

Next
The 2020 WeatherTech SportsCar Championship now moves to central Florida for the 68th annual 12 Hours of Sebring, March 21 in Sebring, Fla.

Video recaps from this weekend’s Rolex 24 endurance race at Daytona International Speedway are being posted on the “Honda Racing/HPD” YouTube channel. Produced by the Carolinas Production Group, the video packages can be found in the 2020 HPD Trackside Video Playlist at: https://www.youtube.com/HondaRacingHPDTV.

Quotes
Ted Klaus (President, Honda Performance Development) on this weekend’s Rolex 24: “I’m so proud of everyone’s efforts: all the preparation, all the work performed in the off-season. Endurance racing, I’ve learned, is like life. Things don’t always go the way you plan. When that happens, you pick yourself up and start again. I’m really proud of all our drivers, our teams at Acura Team Penske and Meyer Shank Racing, and our HPD crew. All of them were working all night long, responding to every challenge that presented itself along the way. But as you know, there are only some things you can control – and some things you can’t.  We’ll pick ourselves up from this weekend’s disappointment. We were in a slightly worse position leaving here last year and came back to win championships.”

Dane Cameron (#6 Acura Team Penske ARX-05) finished 4th: “It was a really tough Rolex 24 for us at Acura Team Penske. It started off pretty well, with the first couple of stints [in the race]. But I think a little bit of contact damaged the car, and from there we struggled with a lot of bottoming and bouncing on the banking, and some inconsistencies [in handling] from left [turns] to right. Fourth [place finish] is quite a bit better than last year, so it’s great to begin the year with a good championship points haul. We know we can win the titles leaving here with less [as happened in 2019]. Obviously, it was not the overall result we were hoping for, really made a big effort for, and deserve. It’s disappointing to let one ‘slip away’, but now we’ll move on to Sebring and try to win that one.”

Trent Hindman (#57 Michael Shank Racing Acura NSX GT3) finished 8th in GTD: “A top-10 finish is obviously not what we want. But there are a couple of main takeaways from this weekend. I was really happy with the way we ran the ‘Roar’ [pre-season test], all through practice and qualifying here and the race. The execution of pit stops, driver changes, brake changes, everything we drilled and practiced leading up to this weekend. When it came race time, I don’t think we had a single significant mistake or penalty when it came to any of those items. The race weekend was as perfectly executed as I think we’ve had in my three Rolex 24s with Meyer Shank/Heinricher Racing. It’s just a shame that variables outside of our control, variables outside of Acura/HPD’s control, ultimately kept us from performing at the level we know we’re capable of achieving. We’ll get after those necessary changes going into Sebring. But I think for all of us, we can be proud of the way we executed, and continue to carry that level of focus into Sebring.”

Just a few of the NSXs from this weekend's NSX Wes

Repost @ludacris: The Secret To Flying High, Is T